Singapore, one of the most advanced and most visited destinations in the world has everything to please the tourist. Singapore Tours offers a visit to alluring underwater parks, shopping in colorful markets and treating your taste buds with tasty delicacies.

When on Malaysia Tours, visit to the captivating sights like the Petronas Towers and monumental building make for a delightful trip.

Day 1 :  Welcome to Singapore! Upon arrival at Singapore Airport, you will be transferred to your hotel. Relax and unwind. The island of Singapore gives you a panoramic view of paradise, you will find the atmosphere of Singapore calming yet exotic making it a persuasive combination of all one would want in a place to reside in. Rest of the Evening is at leisure.  Overnight stay at the hotel.

Day 2:  City Tour: Today after breakfast, enjoy a City Tour of this fascinating city. Your orientation tour of Singapore begins with a drive around the Civic District past the Padang, Cricket Club, Parliament House, Supreme Court and City Hall. You'll have great views of Marina Bay when you stop for photos at Merlion Park and the Merlion itself, Singapore's mythological creature that is part lion and part fish. Overnight at Hotel.

Day 3: Welcome to Magical Malaysia. Enjoy a panoramic tour of Putrajaya. Onto Kuala Lumpur. City tour of Kuala Lumpur. After a delicious American breakfast at the hotel, sit back and relax in your deluxe coach as we proceed towards Kuala Lumpur. Enroute enjoy a panoramic tour of Putrajaya, designed as an intelligent Cybercity and the new federal government administrative centre. Putrajaya showcases the best Malaysian architectural design in an environmentally friendly setting of beautifully landscaped lakes and parks. Enjoy Lunch at local Restaurant. Later proceed for a city tour, places of interest includes driving past the National Mosque, the National Monument, photo stop at the Petronas twin towers and the superb buildings at the Independence Square and Parliament House; photo stop at the King's Palace - residence of the elected king of Malaysia. Visit the famous Chinese Temple. Tonight enjoy a sumptuous Indian dinner. Overnight at Hotel in Kuala Lumpur.

After an American breakfast at your hotel, we proceed to Genting . En route, visit Batu Caves - a leading Hindu shrine in Malaysia. To reach it, one has to climb 272 steps. Arrive Genting drive to the Sky way cable car station for a relaxing, scenic ride up to Genting Highlands. Enjoy Lunch at Local Restaurant.Later, indulge yourself in a world of fantasy at the famous Genting Indoor Theme Park - a fantasyland full of fun and adventure with super-exciting video arcade games amidst a futuristic atmosphere. Also visit the Snow World. You will surely cherish every single moment that you spend here. Later you can try your luck at the largest and only land based casino in Asia -Casino-De-Genting (on your own). Evening transfer back to Kuala Lumpur and Enroute dinner at Indian Restaurant. Overnight at Hotel.

Day 5 : Day at Leisure After an American breakfast at the hotel, the day is at leisure or you can shop (on your own) to your heart's content at Kuala Lumpur's famous department stores. Enjoy an Indian Lunch at a local Restaurant. Later in the night, enjoy a delicious Indian dinner at an Indian Restaurant. Overnight at Hotel.

Day 6: Fly back home. Enjoy an American breakfast at your hotel. Later today, proceed to the airport as this fantastic tour comes to an end. Return home with wonderful memories of your tour with The Royal Escape.

* The above itinerary is tentative and subjected to change without prior notice. This is a budget package and the clients have the option to customize the Hotel/Services/Travel Time.

Singapore City Tour : Singapore, is a sovereign city-state and island country in Southeast Asia. It lies off the southern tip of the Malay Peninsula and is 137 kilometres (85 mi) north of the equator. The country's territory consists of the lozenge-shaped main island, commonly referred to as Singapore Island in English and Pulau Ujong in Malay, and more than 60 significantly smaller islets.Singapore is separated from Peninsular Malaysia by the Straits of Johor to the north, and from Indonesia's Riau Islands by the Singapore Strait to the south. The country is highly urbanised, and little of the original vegetation remains. The country's territory has consistently expanded through land reclamation.

Singapore is a huge city with several district articles containing sightseeing, restaurant, nightlife and accommodation. Singapore is a city-state in Southeast Asia. Founded as a British trading colony in 1819, since independence it has become one of the world's most prosperous countries and boasts the world's busiest port. Combining the skyscrapers and subways of a modern, affluent city with a medley of Chinese, Malay and Indian influences and a tropical climate, with tasty food, good shopping and a vibrant nightlife scene, this Garden City makes a great stopover or springboard into the region. has over 50% of its area covered by greenery and with over 50 major parks and 4 nature reserves, it is an enchanting garden city. Large self-contained residential towns mushroomed all over the island, around the clean and modern city center. Singapore's famed Marina Bay is the place to go to see the city's most spectacular side. With the fast development of this cosmopolitan city-state, the whole Marina Bay area has undergone a transformation of epic proportions. The S$5.5 billion Marina Bay Sands complex is the focal point of the bay, and many of the great things to do and see in the area revolve around this epic building and resort, such as the Science Museum, Casino and various shopping, dining and nightlife options. The Universal Studios Singapore is the first of its kind to open in Southeast Asia. The park has more than 20 attractions in themed zones including the Lost World, Ancient Egypt, New York, Hollywood, Madagascar and Far Far Away (remember Shrek?).

3.Gardens by the Bay Gardens by the Bay is a huge, colourful, futuristic park in the bay area of Singapore; and has been crowned World Building of the year at the world Architecture Festival 2012. The Merlion is more than just a statue. It’s a mythical symbol of Singapore, a place to take in some incredible views, and of course, is the city’s most sought after photo-op. The term ‘must see’ will forever be used to describe the Merlion, with the iconic statue attracting over a million visitors per year. Genting Indoor Theme Park is for the young ones. It is part of the Genting Theme Park Complex and is located inside the older part of First World Plaza. To be able to ride the attractions here, you must have an all day pass ticket that you can purchase at the ticket counter of the outdoor theme park. Inside this indoor theme park, you can find six themed areas from around the world. 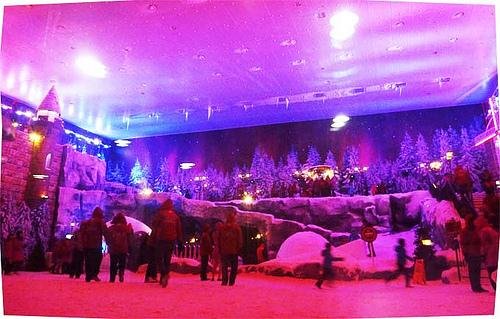 A snowy summer awaits. Is winter your favorite season? Have you always longed to visit a winter wonderland? Want to engage your friends in a snowball fight and make snowmen? well, Resort World Genting is bringing winter to your doorstep. SnowWorld is one of the largest snow attraction in Malaysia. Come and experience the most magical season of all at SnowWorld and bring home the fondest memories of winter! The Petronas Twin Towers is an iconic landmark that merits a visit (and photo opportunity) for any first-time visitor to Kuala Lumpur. Built in 1998, the sleek structure stands at 88 storeys high and joined by a double-decker Sky Bridge that offers an exhilarating view of KL city centre and beyond. The colourful Chinatown is a well-known bargain hunter’s paradise that seemingly never sleeps. Deeply immersed in Oriental culture, heritage and history, it is undoubtedly one of the most popular tourist spots in Malaysia, and holds its own against its more glamorous neighbours, KLCC & Bukit Bintang. 11 km north of KL, Batu Caves is a 400 million-year old limestone hill (with a 100-year old temple incorporated within it), best known as the focal point of the annual Hindu festival of Thaipusam. The celebration attracts thousands of visitors who come to see the colourful spectacle of devotees who pay homage by carrying ornately-decorated ‘kavadis’ (frameworks) combined with various metal hooks and skewers which are used to pierce the skin, cheeks and tongue. On the concourse level of the KL Convention Centre, the 464,515sqm Aquaria KLCC is home to over 150 species of marine life. Some people write it off as a tourist trap, but they’re sorely missing out – beyond the gallons of water filled with necklaces of kelp, coral and sea creatures, is one of KL’s foremost sightseeing attractions with real depth and complexity.

One thought on “Singapore Tour Package”